When locals want to get out and party and don’t want to be mobbed by the crowds, they head to one spot and that’s Spinnaker’s Beach Club. During the day it’s an amazing restaurant, serving up treats at the Paradise Grill or the beachside Cantina taco & tequila bar. At night it transforms into one of the most exciting club experiences in NW Florida. The Groove Room, The VIP Lounge and the Rock Arena provide enough room to get your dance on, the drinks are inexpensive and powerful and the atmosphere is all about having a good time.

Do you know what the “Watermelon Crawl” is? If you don’t, you should. Sharky’s, located on Front Beach road, during the day is a relatively quiet seafood restaurant serving up everything from mahi-mahi, shrimp, scallops, and even fresh Apalachicola Oysters. But when the sun goes down on Panama City Beach, and the live music kicks in, Sharky’s transforms into one of the most exciting bars on the beach and the drinks have a lot to do with it. The best drink, maybe in the entire universe, is the Watermelon drink. Basically, they cut a watermelon in half, hollow that thing out and fill it with enough liquor to take out a NFL football team. By the time you and your buds drink it up, you’ll be doing the Watermelon Crawl for the rest of the night.

Every town has a bar that is their special bar, a place where you can go have a drink with pals, listen to live music and maybe meet someone new. For Panama City Beach, “Harpoon’s” is the perfect place for those hard-to-find good times. With a tropical atmosphere, great food, an impressive drink selection and a staff that knows how to throw a party, you could spend your entire spring break partying at Harpoon’s, never want to leave and have stories upon stories of the good times. 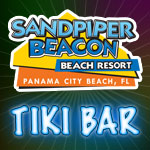 The The World famous Tiki Bar at the Sandpiper Beacon is a well-known Spring Break Hot-Spot! Party on the beach until 4am, with awesome drink specials, the beaches hottest DJs, and a Superclub-like atmosphere! The fun knows no boundaries in the Tiki Bar… where the party starts at 11am every day – with HOT beach side Bikini Contests at 4!

Sometimes you just want to go to a bar, have a drink with friends and avoid the crowds and the crazies. While some may be fine with going to a fancy martini bar or having a few drinks with dinner, most people want a real bar. That bar, at least as far as Panama City Beach is concerned, is Ms. Newby’s. What began as a liquor store has, over the years, transformed into PCB’s #1 good-times tavern. Bikers, breakers and locals all hanging out under one roof, that’s Ms. Newby’s. The drinks are hard, the music is good and the people police themselves. That’s about all you could ever ask for in a bar. 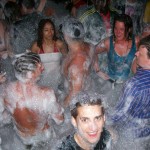 Hammerhead Fred’s is the ultimate Spring Break bar. Why, you ask? Fred’s is known for dropping 40 FREE KEGS of ice cold draft nightly for Spring Breakers. At Fred’s the party goes on and on, making up tasty food, drinks galore and DJ’s that spin the hottest music. But wait until the Wet and Wild and Foam Parties kick off. That’s when you’ll know you landed in Spring Break heaven. The excitement just doesn’t stop at Hammerhead Fred’s.

You’ve seen the movie. You seen the girls dancing on bar tops and crowds screaming mad while some guy gets tequila poured down his throat. Well, while you may think that’s just movie magic, you’ve obviously never been to a real Coyote Ugly. Panama City Beach’s now infamous Coyote Ugly, located on Front Beach Road, is known for throwing down an insane party every night of the week. In fact, everything you saw in the movie is like a Disney version compared to what really happens on Panama City Beach. But don’t say we didn’t warn you; Coyote Ugly is one crazy good time.

There are lots of places on the beach to watch the big game. Only one place lets you watch the big game on 360 degrees worth of HDTV, while serving up Fat Tuesday drinks. That place is Pineapple Willy’s Pier Bar. Known because of the adjacent restaurant, the Pier Bar is a recently opened component that is quietly taking over the sporting community on Panama City Beach. Not only are the all the games crisply displayed on huge televisions, but each table gets its own speaker box to make sure you hear the game you want to hear. While you’re team is crushing its opponent, you get to kick back and have bucket of BBQ ribs right on the gulf. 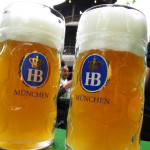 Usually a few beers will have you speaking in slurs, but at Hofbrau Beer Garden a couple cold beers from their immense selection will have you shouting Austro-Bavarian German words like “Gemütlichkeit” and “PROST!” before succumbing to that festive Hofbräuhaus spirit. They import fresh beer from Munich. the food is authentic, featuring a menu of Bavarian Specialties, developed by a Master German Chef. With authentic tables and benches from the original Münchner Hofbräuhaus Hofbrau customers will find themselves transported to legendary Munich beer hall. Outside, our beer garden entices our visitors to soak up some of that famous Florida sun, all the while enjoying a crisp, cold Bavarian brew. 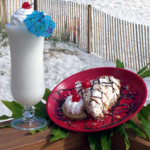 The Barefoot Beach Club, located on the beach between the Legacy and the Beachbreak, is serving up seafood, sandwiches, surf and sunshine from its open-air deck. Just imagine sunning on sugar-white beaches and then taking a few steps to collect a cool tropical drink and local seafood dishes. Sample signature items like our Barefoot Burger made with 100% Angus beef or our homemade Pina Colada pie. Barefoot Beach Club is one of those places you’ll be talking about soon-after you’ve returned home and daydreaming about until you come back.
.
Bare Foot Beach Club