PANAMA CITY BEACH, FL — The emerald waters and white sands of Panama City Beach have once again drawn national attention and a placement on another Top 10 travel list.

The budget travel site www.cheapflights.com has named Panama City Beach as one of the top places to visit for college students trying to stretch their meager vacation dollars. The area was in the top tier because “accommodations are relatively cheap and very easy to find.”

This ranking comes on the heels of other media and travel sites boasting about the area too, including cnn.com (top five winter travel spots), tripadvisor.com (top five family vacations) and travel.aol.com (top 10 budget destinations).

Cheapflights said that while some other areas were less crowded during Spring Break , “if you’re not looking to get away from the crowds of other college kids on Spring Break, then Panama City Beach just might be the place for you.”

“The party never ends during Spring Break in Panama City Beach and – as every college student dreams – you might even run into a few celebrities as you stroll along Florida’s shores,” according to the website.

Marketing plans for Spring Break 2012 are piggy-backing on last year’s celebrity blitz, including booking celebrities from MTV reality shows to both spread the word about Spring Break through the pcbeachspringbreak.com website and Facebook page and also hosting major events during March. Celebrities from popular MTV television shows are currently being contracted to appear. 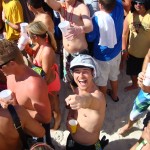